Just like trying to develop digital games, card/board game development is a double edged sword.
I love designing them, because there’s little to no friction between ‘hey I want a game to play like this’, and it playing like you want (only at smaller scale development though obviously).
Unlike digital games where you have to worry about game engines programming and bugs in-between, before resources/animation/etc, write a few words on a few cards and you can play something fun.
But eventually the rules have to come out of your head and into a rulebook that’s understandable, and countless obstacles surround being able to share the experience-you can’t just send a digital file to someone to download.
So I have designed a few after burnout of issues with game engines aligning with opportunities to work on them, and early playing about with Tabletop Simulator etc being a starting point for designing them, followed by becoming a big fan of modern boardgaming.
But as mentioned I can also get disheartened by all the difficulties that lie in producing/sharing a final product others can actually play. I’d like to make proper digital versions but multiplayer isn’t free/simple, and Tabletop Simulator/Tabletopia each have design/development weaknesses that frustrate me, though technically functional enough for playtesting.
However below is one of those you can try with any standard poker deck, followed by a preview of one that’s been in the works for over 2 years through various delays/circumstances/priorities but is a top favorite of mine.
There’s many more I’d like to eventually be able to share but revealing/producing them can be complex and timing can be even more critical than the digital games, especially as it can be difficult to balance possible interest when bouncing between physical and digital games.

This is one I designed for a contest to use just 18 cards from a standard poker deck.
I decided for this to try make a simple one, familiar enough for anyone that’s played a game with a poker deck to easily play, but a bit different and fun from there.
“Take turns maneuvering cards from your hand and the central area, to end, together with the remaining cards in the center, with the best ‘hand’. Keep your goal hidden while trying to workout and stop others.
To win, be first to achieve the best ‘hand’ 2 times.”

This was one of my first physical card game designs, inspired by a fun crazy concept Woestijn posted on twitter that had me going ‘that’s just so crazy it might actually work’ (The design space was crazy to wrap my head around, but it did indeed eventually work haha). I was also been honored to be able to commission them for its art.
The basic concept was a strange inverse Yu-Gi-Oh game with less cards and bloat, trying to lose points.
It’s hard to describe just how weird it was developing the path to victory that way, not making it as simple as ‘gain negative points’, and the result is silly hectic fun with a lot of crazy combinations of circumstances and tough decisions in a compact deck.
I want to wait until being able to produce a final intro video like Inris’s above before detailing it more, but here’s the rules light thematic introduction setting the tone.
“Take the role of famous, yet lazy summoners, with the goal of escaping promotion by having their creatures lose even the easiest battles.”

A screenshot preview of some of the cards for the game 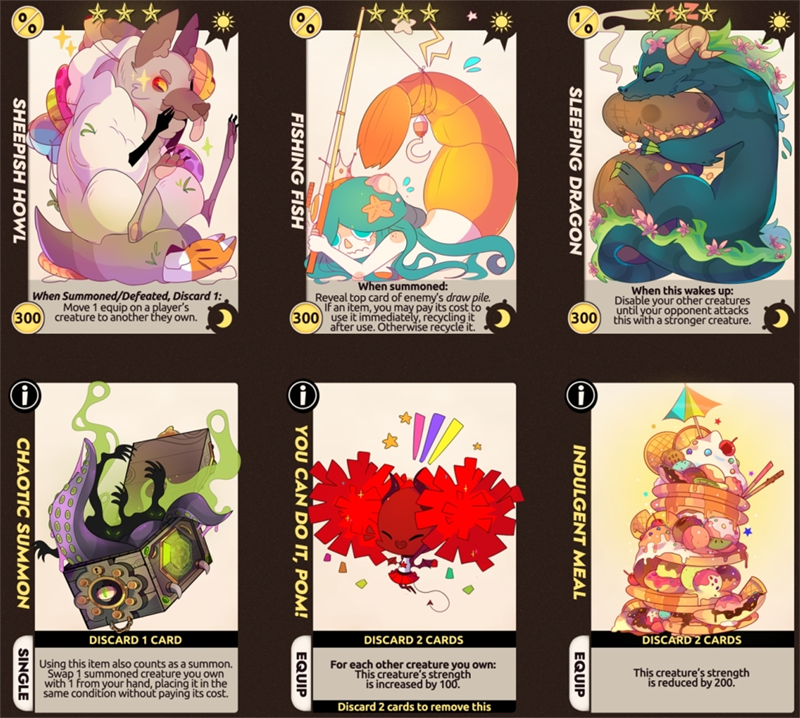 Developing games in the hope of creating engaging and enjoyable experiences. Many thanks to @Oldestwoman for my pfp

New game #madewithunity , 'Less tally cosmically', a quick to play but deceptively thinky puzzly experience of moving and destroying blocks, is now also available on android or can be found here - https://swiftillusion.itch.io/less-tally-cosmically

My new game, 'Pick a piece village', a relaxing puzzly digital roll and write like experience, is now released and available to play here - https://swiftillusion.itch.io/pick-a-piece-village - which can also be visited to play on mobile.